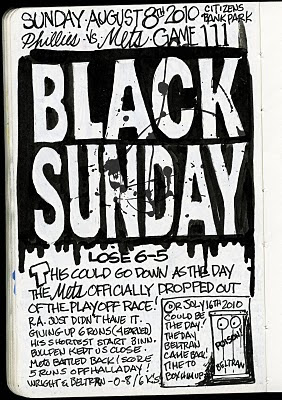 I know Dickey didn't have it today, but Beltran doesn't have it everyday!

He has been a poison to this
team since he's come back. Actually since the talk of his return.
Not only did he have a brutal day at the plate -- 0-for-4, three strikeouts, the last with the tying run on second and one out in the seventh of a 6-5 Phillies victory. But on 2 balls hit by Jason Werth He came up short on both plays.
The first a HR which he should have caught and second, a lazy fly ball that went for a double due to his lack of knees!
Time  to get him out of center and get him out of the lineup.
The Show is no place for rehab!
Maybe he could use a vacation with Ollie, that other clubhouse poison! And Wright, wipe that grin on your face... I've been watching you too.