My Tribute to Bill Gallo. My Babe Ruth. 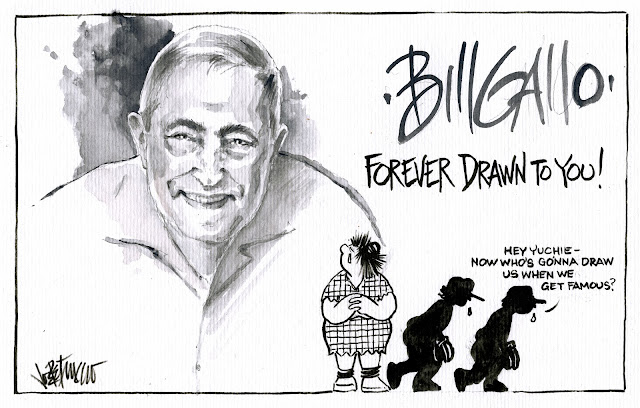 When I was a kid, the one thing I couldn't wait to see everyday was the Gallo cartoon in the Daily News.
He wasn't just a sports cartoonist to me. You see, I wasn't very good in sports. To be honest, I sucked.
But I could draw. Bill Gallo was my Babe Ruth. While my friends were admiring Mantle, Seaver and
other sports stars, I was admiring the man who drew them.

I met Bill for the first time when I was in the 8th grade. My dad called him and told him I loved him, followed him
and wanted to be like him some day. We met up at Daily News building on a Saturday morning. The place was kind of empty. He was all mine. But he made me feel like I was just as important to him.

We became friendly from that day on. I was lucky enough to see him in action as the President of the National cartoonist Society at their annual dinner each year. Bill even wrote my letter of recommendation for School of Visual Arts. The college I attended.

It's been 40 years since our first meeting. But, to this day, when I look at one of his drawings I feel like that 13 year old boy standing next to his drawing table watching him finish up the day's cartoon.

The mark you made can never be erased.
God Bless you Bill.
Posted by Joey_Paints at Wednesday, May 11, 2011